I’ve combined two weeks because I’m sooo busy. But fortunately not too busy to try…Arial Yoga 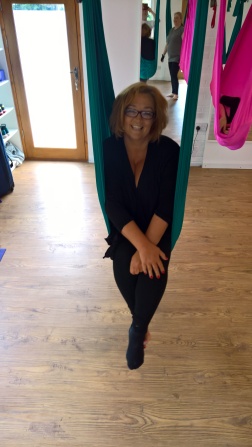 I must admit, I wasn’t looking forward to it with joy but because of the school holidays and given that my husband that was going a little stir crazy looking after our 11 year old daughter, I thought it might be fun to book a family class with both husband and child.

I know that yoga is probably not the best thing for weight loss, but I thought it might be a fairly gentle introduction to actually moving my body. In truth, I had no idea what to expect when we turned up for the class at a suburban house with a garage on the side converted into a yoga studio.

The first thing I saw was a full size skeleton slumped on the floor in the corner. Fuck me, I thought, maybe yoga DOES make you lose weight! This was a GOOD thing. 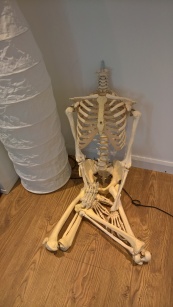 The second thing I saw was the slings hanging from the ceiling. Maybe this was a BAD thing. But actually it looked like it could be fun, my daughter was excited as hell, and even my husband was game to learn a few moves. 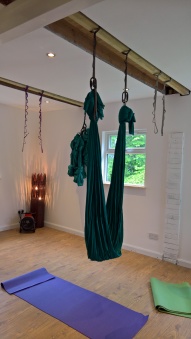 My daughter made it all look rather elegant. I didn’t. 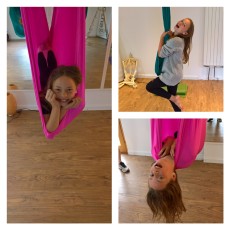 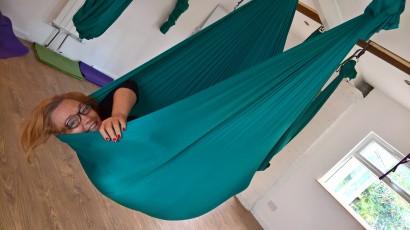 There followed an hour of stretches, swings, slides and bends all aided by the slings.

At one point we mounted the sling like we would a swing or a trapeze. For a few moments I indulged in my long term fantasy of being Satine in Moulin Rouge..quickly ruined by the fact that I was directly opposite a mirror the size of a wall. Looking at myself full on I then had to attempt a proper inverted acrobatic move. You sit on the swing, slide your arse back so that its hanging off, flip backwards, bring your legs up over your head fully extended spread as wide apart as you can take them, hang your arms down by your head which is now only an inch from the floor and allow your legs lock you in place. You are now literally legs akimbo and arse over tit. Think Rebel Wilson in Pitch Perfect 2. Yes, that.

It was not my finest moment. While my daughter almost collapsed with laughter my husband just looked a little pained. He hasn’t seen me in that position since..well, NEVER. The closest was child birth and I wouldn’t let him look. Getting OUT of the position was even worse, taking both the yoga teacher AND my husband to haul me into an upright position.

The end of the session was the best bit of all. There is a manoeuvre involving your knee, your arms and centrifugal force which turns the sling into a cocoon. Lying full length in what feels like a zero gravity hammock on your back (the rollover was a little inelegant) it was time for meditation. There followed a guided 15 minute meditation narrated by the lovely teacher Mel. Imagining a blue glowing star moving around my body (I could imagine it any colour I wanted) I fell into a state of relaxation I haven’t been in for a very long time. It was GLORIOUS.

I lost the plot (and thus my concentration) at only one point. Mel was talking in hushed tones about our Mind Monkey. The ‘monkey’ is apparently the chattering, highly excited, slightly angry little voice that constantly talks to you inside your head. We had to visualise our monkeys gently curling up in a furry ball on our laps so we could stroke it into a state of peace and submission.  The killer, for me, was the narrative; ‘Imagine your monkey is crawling onto your lap where he or she…’ pause ‘….actually it’s a non gender specific monkey…’ HAHAHA!!!! It was a NON GENDER SPECIFIC MONKEY! My cocoon began to swing wildly as my body convulsed into slightly hysterical silent laughter. Best thing to happen all week!

I’ve discovered, thanks to a good friend, how to make the best ice-cream IN THE WORLD. You just need oat milk, 70% chocolate and an ice cream maker that costs exactly the same as small family car. I kid you not – on the taste or the price. The machine is called the PacoJet and takes 20 seconds to make the silkiest ice cream you’ve ever tasted.  It’s like a nutribullet for people who know how to LIVE. I’ve started a ISA so I can save for one.

I was invited to the opening of the burger joint that’s moved in underneath my office. This was a challenge. I easily resisted the burgers (I went for chicken) and the chips (I went for salad) but the BUCKETS of fried onion ‘strings’; golden, crunchy and salty nearly undid me completely. I left early, sobbing. 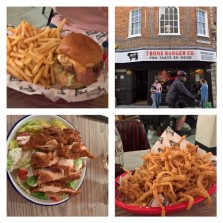