I’ve worked out why I hate exercise so much. Quite apart from the fact that its seriously uncomfortable and I hate sweating, get enough of that with the hot flushes, it’s also really, really boring. If I’m going to exert myself I need a ‘purpose’ beyond the whole ‘getting fitter and losing weight’ thing. Walking TO somewhere is ok – there’s an obvious point to that – but walking for the sake just doesn’t do it for me. So I’ve devised my own way of increasing my steps in my own home. It’s called EMPTYING THE DISHWASHER. Number of steps from dishwasher to plate cupboard return = 8. Steps to kitchen dresser (mugs and glasses) return = 20 (long kitchen). So, by emptying the dishwasher ONE ITEM AT A TIME I can do at least 400 steps. Result! Takes a million times longer of course but it has a purpose; I end up with an empty dishwasher – and a very happy 10 y/o daughter who’s been relieved of her duties until she’s 12.

This week was always going to be difficult. I had 2 days in London which included one breakfast and two lunch meetings. I wasn’t looking forward to choosing the clean options while ignoring the stuff I REALLY wanted to eat. 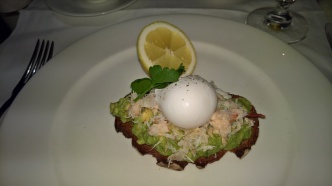 2. Lunch at Berners Tavern http://www.bernerstavern.com/ still fairly full from breakfast I opted just for a starter. I had ‘diver scallop crudo with cucumber, black radish, jalapeno and lime ice’. In addition to learning that black radish is a thing, I discovered that the starters in Berners are TINY. It was 2 thinly sliced raw scallops hidden under a slush puppy. As it cost 15 quid I tried to make it last, but I breathed in too deeply between sentences and it was gone.

3. ‘I’ll have a decaf coffee with skimmed milk’…words I never thought I’d say.

4. I smashed my previous 8000 steps record with the grand total of 11,230. Wasn’t that hard (apart from the fact that I still can’t feel my feet) but it wasn’t by choice. On the first London day I had 4 meetings. As I never walk or travel by tube when in London I was shocked to see my diary looking like this.. 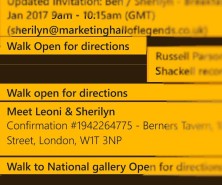 Turns out my PA has decided to support me in my new regime by refusing to book taxis for any journey less than 2000 steps. I consider, for a moment, whether this is grounds for dismissal.

5. Second London breakfast came via Great Western Railway – a banana. I pretended it was a muffin.

6. ‘I’ll have a peppermint tea please’…I’m not sure who I am anymore.

7. Lunch at Jar http://www.jarkitchen.com/ Drury Lane. I had roasted brussel sprouts, cous cous, soft boiled egg and raisins. Sounds truly weird but tasted divine – and will be replicated at home for a fraction of the price. Not so the oat milk which tastes as weird and it sounds. 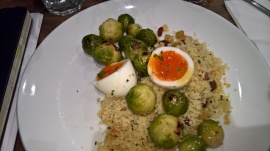 9. Found out that Fitbit awards you a trophy every time you lose weight. Well thanks you patronising bastard but next time please award me a packet of salt n vinegar crisps.

Next week I will mostly be in Austria. It doesn’t bode well, I hate being cold and love strudel of any kind…..

One thought on “Week Two – in which I walk..mostly to restaurants”